You Cannot Make A Spoon Better Than A Spoon

So said Umberto Eco. The statement is bold and open. It even has a peculiar vibe which, to be honest, only makes me want to prove him wrong. So, can you? Can you invent something better than such a remarkable and lifelong invention? Plausibly. You probably are already thinking about something that could easily be improved… Is it a groundbreaking invention? Like The Computer? The Internet? Or are you thinking about improving the selfie stick?

When he said it he was specifically talking about books, which just makes me think about the e-ink readers instantly. Are they better? Is it an improved version or should we scrap it out and call it a new invention that is similar and not related? To me, it is… by far.

One of two things will happen: either the book will continue to be the medium for reading, or its replacement will resemble what the book has always been, even before the invention of the printing press. Alterations of the book-as-object have modified neither its function nor its grammar for more than 500 years. The book is like the spoon, scissors, the hammer, the wheel. Once invented, it cannot be improved. You cannot make a spoon that is better than a spoon. When designers try to improve something like the corkscrew, their success is very limited; most of their “improvements” don’t even work. Philippe Starck attempted an innovative lemon-squeezer; his version was very handsome, but it lets the pits through. The book has been thoroughly tested, and it’s very hard to see how it could be improved on for its current purposes. Perhaps it will evolve in terms of components; perhaps the pages will no longer be made of paper. But it will still be the same thing.

I guess it boils down to our appreciation and I can not think of a better way to explain this than with music or movies. For example, to me… There will never be a better version of Sweet Child O’ Mine than the one performed by Guns and Roses. I guess most will agree there, so the next one might get a bit of hate. It is presumptuous, probably rude.

On the subject of live performances… I brink you the one that moved Robert Plant. To me, this Spoon was made better than a Spoon. 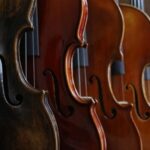